We Are Doomed Coming to the PS4

Mobeen Fikree, founder of Vertex Pop, posted on the official PlayStation Blog about his new upcoming twin-stick shooter, We Are Doomed. We Are Doomed will be arriving on the PS4 and the PS Vita and will be shown during the PlayStation Experience next month.

Fikree had some details about his game that he talked about in the blog: “The entire game is built on a risk/reward mentality. Every mechanic is designed to make throwing yourself into danger and dashing across the arena to collect Trinkets (the purple cubes) pay off. It makes for a fast-paced game of constantly evaluating your options while maintaining composure.” Fikree later added: “We Are Doomed features a unique lo-fi aesthetic, with bold shapes, glitching geometry, and neon colors. This isn’t a throwback to the way games used to look, but an alternate reality scenario: what if texture-mapped, shader-calculated, photo-realistic graphics never happened? What if instead, flat shaded, vector-based graphics ruled the world? We Are Doomed explores these questions in gloriously colorful fashion.” 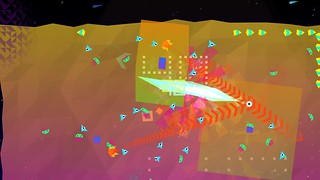