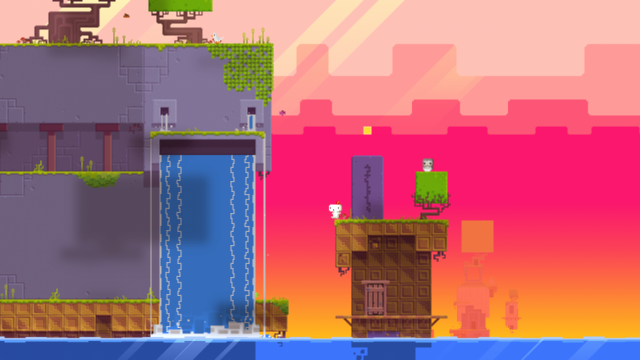 Any game named after a weird red head ornament is going to be a quality game, so it came to no surprise when I sat down to play this one of this month’s free PSN games; Fez.

Developed and published by Polytron Corporation this gem was originally released in 2012 but hit PS4 sometime last year. So what do you want to know? You adopt a tiny white square person who like us all has a real sense of adventure, wonder and well he’s just an all round (square) nice guy. The game starts you off in the safety of the a 2d village where Gonzo can run, jump and grab ledges, climb vines, everything you need to survive this 2D world.

After quickly exploring the different rooms and talking to the villagers you will talk to Geezer an old time adventurer who sends you on your merry way. What to do? Well, just then a cube arrives! I know a cube! In a world that’s made of squares that’s a very big deal, very big. It explodes into 64 pieces, which you must  collect, or else the world will rip itself apart! No pressure guys.

Oh the cube also gives you a guide who helps you on your way, and a Fez! This amazing hat gives you the ability to shift dimensions so the 2D world that is already colourful and stunning is well, you get to see the whole beauty and not just the boobs. That’s the clearest way to explain it, you’re not at first base any more, you’ve gone straight to third!

Players will soon realise that you can finish the game in a matter of hours, you can get to the last hour just before lunch, but! There’s more secret passages than an Indian Jones film, more keys than Kingdom of Hearts and more squares than you’ll know what to do with! This is a game that, well it takes you back to the days of being in an arcade and trying to beat the best score on there. (And then replacing the name with a new dirty one).

The most brilliant aspect of this game, is the fact that there is no threat. Whatsoever, while you’re at third base you’re not going to get caught short, I.E. someone catching you enjoying this amazing game. No, you fall 8,000 feet and break your neck? No problem. You get warped through a black hole? This game is for perfectionists who love platinum trophies. Its sole purpose is to show players that a game does not need urgency, nor fancy graphics or a gun.

It turns out all you need, is three things. Colour, the ability to jump and a cute white square who like me, adores a good old Fez.

A brilliant but somewhat random storyline, a true game that will test the patience of any completionist.

A tad repetive and the lack of a threat can sometimes make the game dull and lacking in pace.

A brilliant game but the replay value is too low for this game to make too much of a dent in the gamer's market.