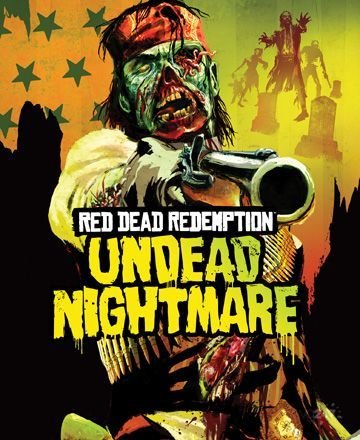 Unleashed upon the world of Red Dead Redemption: Undead Nightmare features an entirely new single-player campaign that follows John Marston as he tries to find a cure for the highly-infectious undead plague spreading across the frontier.

With all new cutscenes, voice work from the original actors, creepier landscapes to explore with zombified animals, and a whole new soundtrack, it’s clear that Rockstar Games put a lot of work into making this a complete, high-end production.

The nightmare begins when John and his family are having a peaceful evening together at their ranch at Beecher’s Hope, and all of a sudden regular folks are transforming into flesh-eating monsters. Relatives rise from the grave only to grab a bite out of their loved ones, and best friends quickly turn into bitter enemies due to fear. Luckily, John Marston is around and he’s not going to stand for such a dire situation.

As amusing as it is to see Rockstar Games subverting its own hard work, it’s the changes to gameplay that really make Undead Nightmare so refreshing. Long-range gunplay is swapped out for a frantic riff on classic survival horror: ammunition is limited, and your swarming opponents will absorb bullets unless you aim for the head. John’s slow-motion Dead Eye ability becomes an absolute lifesaver, but since your meter invariably depletes before you’ve dispatched a fraction of your opponents, most large-scale battles become tense, hard-fought affairs.

In variation of Red Dead Redemption, it’s the array of side quests and challenges that arguably steal the show for Undead Nightmare. The ambient gameplay challenges remain as slyly addictive as ever, and treasure hunting has made a return. The local wildlife have all been transformed into cadaverous equivalents – the undead cougars and zom-bears are particularly mean. Better still, if you may be lucky enough to stumble across a number of mythical creatures.

Though the game has received a zombie face-lift, it still plays out in a very familiar way. The missions are the same style as in Red Dead Redemption, but they’re altered. Instead of hunting for fugitives, you’ll search for lost family members, and clearing out graveyards is a substitute for the gang hideouts. There are five new challenge ranks to conquer, wacky side-missions to enjoy, and a main story line full of theories on how the dead rose from their graves.

It’s every man and woman for themselves in a zombie apocalypse and the only thing worth fighting over is ammo, which explains the lack of cash in the economy. Such desperate times also call for desperate measures, and thankfully your actions are no longer measured by an Honor meter. So do what you want — kill survivors and swipe their ammo or work in tandem with them. It’s up to you. The intention of Undead Nightmare is to play around and have fun in a giant ludicrous sandbox world, not to make you feel guilty over murdering someone for a few bullets.

All in all, Red Dead Redemption: Undead Nightmare is a game any zombie lover should have added to their collection. Although I don’t think it deserves a 10 (no game is perfect), I do think it is worth your time playing, and I think you will have some real enjoyment out of it.