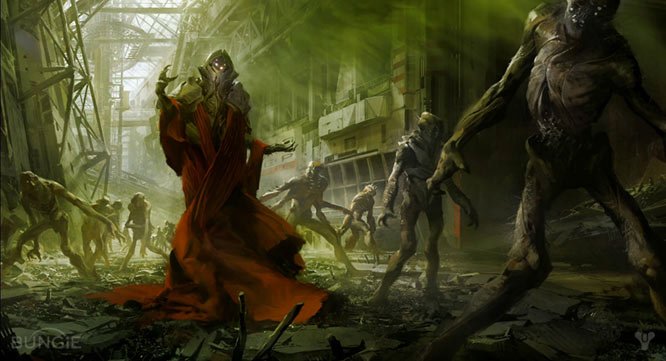 Bungie calls their brand-new IP, Destiny, the next great action shooter. Bungie is proud of what they have created in the Halo universe, but they compare Halo to pipelines. Bungie wants to create a game that millions of players can visit again and again in the next 10 years — that’s how Destiny starts.

Today at GDC, the game’s Art Director Christopher Barrett and Design Director Joe Staten talked a little about Destiny.
What Is Destiny?

Destiny is a hybrid of fantasy and sci-fi. There are castles, beasts, heroes, and other fantasy elements.

The Influence Of Destiny
Destiny is a completely new project for Bungie, and the game’s visual style is inspired by a lot of artists such as: Peter Gric, Sam Glliam, John Harris, etc. The game’s armor and vehicle style was influenced by anime, according to the two developers. The developers also mentioned the Post FX engine technology, which they use to unify art.

Mystery And Adventure
Many fancy arts were shown at the speech. The developers said they hoped the many places in the game were both familiar and strange to players. Bungie unifies the visual theme and creates the destination postcards, which will be then turned to actual graphics by the world building tool.

Become A Legend
From one hero (Halo) to millions (Destiny), Bungie believes choice is the key to make everyone a legend in the world and choice starts from character creation. Presented at GDC, there are three races:

Of course, there are choices on class. Bungie unveiled Titan, Hunter and Warlock.