Throughout the years of Call of Duty, Activision have always had multiple studios working for the major franchise from Infinity Ward to Treyarch and even Sledgehammer Games.

It has already been confirmed that Call of Duty: Ghosts is coming out this year around the same time the next-gen consoles are launched, but what about next year?

Rumors have emerged that in 2014, Activision is continuing their popular series by releasing Call of Duty: Modern Warfare 4.

The source comes from Playst4tion where they looked up a LinkedIn portfolio of a Sledgehammer Employee. The summary of the employee clearly shows that he has been working on the next Modern Warfare release.

Check out the screenshot of the profile below: 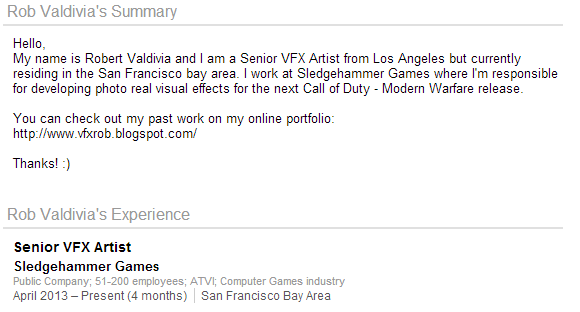 The employee Robert Valdivia is the Senior VFX Artist who is responsible for “developing photo real visual effects”, which tells us that the game’s graphic should be better than what we will see from Call of Duty: Ghosts.

No other details have been discovered and the name isn’t official yet, but we expect it to be Modern Warfare 4 from the way the portfolio sounds.

How do you fans feel about a Call of Duty: Modern Warfare 4 next year?