2013 year has been generous to us PlayStation gamers by giving us a brand new collection of gaming characters which are not only diverse and polarizing in nature, but also can attain cult status in coming years.

It’s an immense feeling of satisfaction for me when I complete a game and that one character in the game still subconsciously remains with me for a long time after I’ve put down my controller.

So I came up with my version of five best game characters of 2013.They are not in any particular rank or order. I spent time with all five and all left an impeccable impression which will surely make me revisit and play with them once again. Let’s begin. 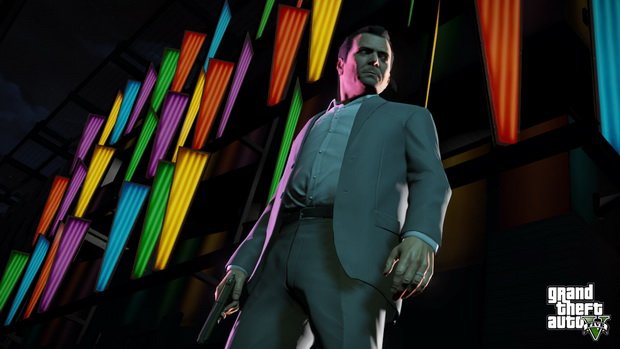 Michael is a very dynamic and brilliantly written character. He has layers within him as a person which peel off dramatically as the game progresses. To start off, Michael comes across as a short tempered, aggressive family man in his 40s who is living through mid-life crisis. Michael is so unpredictable that at one instance without calmly giving a second thought, he can pull off a hillside mansion as a result of his wife Amanda’s affair with her tennis coach. On another occasion Michael can smash Jimmy’s flat screen just because his son impolitely told him to leave the room. His other behavioral traits include sharp sarcasm, cynicism and his lack of morality. It’s a treat to listen to his jokes and sarcastic conversation with Trevor in the game.

Michael has a positive side too, which primarily consists of his love for his family, though he accepts the fact that he is not good at expressing it and which is also visible with Michael’s concerns, while displaying anger on Tracey’s desperate lifestyle to get fame or Jimmy’s  lethargic lifestyle to play games and be hopeless. Though he is careful and wise when it comes to crime, he also does not give up on his family. In the end of the game, his family troubles do tend to resolve slowly. Overall, the only protagonist till now in GTA series to have a spouse and children, Michael is one of the best detailed and interesting characters of 2013.

In the latest iteration of Tomb Raider, Lara Croft is just 21 years old. She is 5’6”(167cm) tall, has brown eyes and hair with fair complexion. A complete revamp to what Lara was, with added vulnerability in her nature considering she just finished her education, makes this character very fresh and attractive. Nevertheless, Lara can handle weapons and withstand physical extremities as she has been trained by her mentor Conrad Roth. Lara has a natural flair for searching relics and experiencing adventure, has knowledge about Oriental history and culture- qualities which draws her to the lost Japanese kingdom of Yamatai as she aboards the Endurance ship.

Lara exudes high amount of emotional depth as a character. She is smiling at times when with Roth or her best friend Sam. But we also see a terrified Lara, who copes with fear and remains strong in moments like when she is forced to execute her enemy for the first time with a bullet in his head.  A severely agitated Lara doesn’t give up and transforms into a survivor after the ship-wreck and learns new skills and abilities while traversing the island. She is also ingenious with her ability to collect salvage found on island for improving her weaponry. Also the motion capture technology used by Crystal Dynamics makes sure Lara captures your attention with her detailed expressions rather than her physical assets. Honestly, I have a big crush on this brand new re-imagination of Lara Croft which assures her place as one of the best gaming characters of 2013.

Joel and Ellie together form one more pair of superbly written characters without which the story of The Last of Us wouldn’t seem so impactful and real. Joel is a hard-hearted man in his 40s who survives against the cordyceps brain infection. Joel’s positive side, just like ‘humanity’ in the game, has been overshadowed by his darker personality to endure the hell which he now daily encounters after an outbreak of a pandemic fungus. During his outing with Ellie, Joel reveals that he aspired to be a singer. But now he smuggles drugs and ammunition from the quarantine zone.  Joel is fit for his age and can jump from great heights, perform choke holds and has knowledge to handle various weapons with great finesse.  Joel however retains his morality in bits for Ellie which reminds him of his beloved daughter, Sarah. As the game progresses, he gains faith and confidence in her and becomes protective about her.

Ellie on the other hand is a young efficient teen who hasn’t experienced the life before the epidemic. She is a spontaneous, volatile, reckless girl and doesn’t restrict herself from foul language or ferocity to complete a task at hand. Even Ellie cares for Joel and helps him in survival though making it clear that she is confident enough and doesn’t require a nanny.  Her character shows eagerness and vivid interest in collectables of music, movies, books and video games. Having brought up in an orphanage, Ellie does consider herself, mature enough and can even seem to command adults.  Also Ellie has a unique power to remain absolutely immune to the deadly fungus. Yet Ellie emits a peculiar kind of innocence and vulnerability which is a pleasure to experience in complete contrast to Joel. She fears being alone and losing her dear ones like Joel.  This mutual sharing of trust and care elevates the game on every level, making Ellie and Joel a pair which not only manages to make an entry into our list, but also in our hearts.

The perfect companion, exaggerated, is determined, expressive eyes and vivacious – these are the attributes that comes in my mind when I think of Elizabeth from BioShock Infinite.  She has a frictional relation with Songbird, the mechanical creature who holds her captive since her childhood but also has been her companion. Elizabeth also helps Booker, the main protagonist in battles, though she does doubt his intentions in the beginning. Booker can obtain salts for health and ammos from Elizabeth, while she remains in cover. She dislikes murders and calls Booker a monster for wiping out the Founder agents in Battleship bay. She is one smart girl who is good at lock picks, medical remedies, code-breaking, also an artist and singer.

She also has shortcomings like any other nineteen year old. She can be careless at times, like her action of opening up a Tear to avoid a bee, nearly caused an assault by Songbird on her and Booker. She is childlike while dancing at the beach in Battleship Bay, but gradually matures as tale progresses by repenting her involvement in Vox’s revolution and is more determined to cease Comstock. Due to her physical form split (her litte finger) between multiple time dimensions, Elizabeth has a nature ability to open up Tears to other time dimensions, exploiting them to get weaponry, even humans  and do time travel with Booker. Finally when Elizabeth does get full control over her powers, she finds courage to drown Booker to destroy Comstock’s existence. Also the game includes alternate Elizabeths in alternate dimensions, specially the one who is Columbia’s heir explains how she regrets her actions and tries to help Booker save his version of Elizabeth. Overall, a complex yet endearing and detailed character of Elizabeth makes her one of the best characters of 2013.

Nyaa is the elder brother of Naiee in ‘Brothers: A Tale of Two Sons’. The game starts with a cutscene of Naiee all broken in tears near a tomb-stone, and it instantly and emotionally captures your attention. Nyaa and Naiee are characters so gripping that they almost capture your thoughts of you being with your brother instead of them and experiencing what the brothers in the game do. Controlling both the Nyaa and Naiee individually with left and right analogue sticks respectively can be tricky, though an immensely immersive way of interaction with the brothers. You’ll feel as if you are holding both their hands and guiding them through the adventure to get the cure for their beloved father.

Both brothers have different set of abilities and quirks. Nyaa’s physical strength is helpful in pulling switches and activating bridges. Naiee’s sheer small size can make him pass through tough gaps and open gates. For one instance, when Nyaa interacts with a woman holding a broom, he tries to help her by sweeping. Naiee on the other hand, tries to entertain her by balancing the broom on his palm. Such instances compel you to go slow with these brothers and try to discover more of how interactive they are with the world and the NPCs around them.

The strength of these two brothers lies in their determination to co-operatively traverse high mountains, solve intelligent puzzles, defeat ruthless dark creatures and complete their main task while simultaneously strengthening their bonds of brotherhood which indirectly makes you empathize with them.And don’t forget, all this is done through minimalistic gibberish dialogues for you to interpret, no subtitles and expressive animations. Nyaa and Naiee both make sure that their tale is worth experiencing which makes them yet another entry into our list.

This was my list of 5 best gaming characters of 2013. I recommend those who haven’t experienced any of these characters, should do it right away. I look forward to your feedback. Happy Holidays!