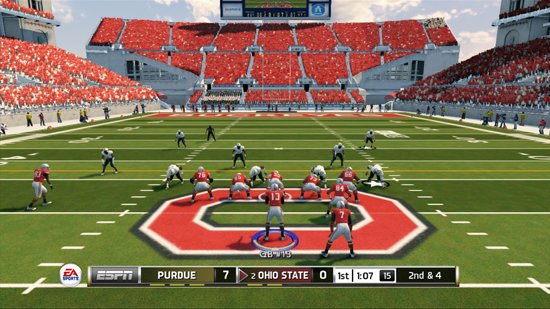 With all that being said, college football season starts early as EA SPORTS officially released the NCAA Football 14 demo on the PlayStation 3 yesterday.

Gamers will now have the opportunity to experience a neutral site game as they lead either Alabama or Virginia Tech in the Chick-fil-A Kickoff Game in the Georgia Dome.

Gamers can also get a feel for the new Option attack with either Oregon or Texas A&M at Kyle Field, or can take part in one of college football’s greatest rivalries when Ohio State and Michigan square off in The Big House.

The demo also marks gamers’ first opportunity to get their hands on Infinity Engine 2 and see how the power of realistic physics allows them to play true to their favorite school.

A break down of all the match ups and features of the demo from EA SPORTS’ blog is available here.

Rewards are also plentiful this year, as anyone who completes any of the three match ups (win or lose) will receive a free card pack for use in the brand-new NCAA Football Ultimate Team mode. Gamers can earn a second Ultimate Team card pack by sharing the demo with friends.

In addition to the in-game match ups, those looking for a leg up on the competition can begin learning new game mechanics and refreshing their abilities in the new Nike Skills Trainer.

This new training mode provides full video tutorials as well as gameplay drills for football elements such as how to effectively run the Triple Option, dominate the air with Total Control Passing, win the turnover battle as a Ball Hawk, and much more.

NCAA Football 14 gives players more control over their fate on the field or as a coach than ever before.

The introduction of Infinity Engine 2 allows you to play true to your team with gameplay tuned with the college game in mind, while new Coach Skills and Power Recruiting create the most engrossing Dynasty experience in a generation.

Add in the all-new inclusion of the fan-favorite Ultimate Team mode, which includes a large number of former NCAA stars, and you have the most feature-rich entry in the history of the franchise.

College football enthusiasts can get more news by tweeting with the hashtag #PLAYTRUE.