Strength of the Sword 3 coming to PSN on June 5

This Week ‘Strength of the Sword 3’ is arriving on European PSN; it is a game that was developed by two individuals of a small indie gaming company called, Ivent Games.

Strength of the Sword was first revealed back in 2009 at the Game Developers Conference. On June 5th, the game is launching on the European PlayStation Network after five long years of development.

The studio informed PlayStationGang that a U.S release is also planned but failed to give us a release date. 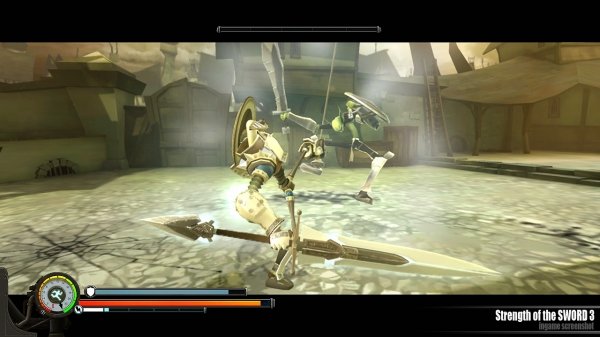 The “blade-wielding, magic-powered war machine from the heavens” combat game is currently titled, Strength of the Sword 3, and it is the first game labelled as the third, with a series that doesn’t exist.

The game is more in to giving players a challenge rather than just going through the story. The system’s “group AI” recognizes how each gamer plays and uses that advantage against the players, making it a stimulating gaming experience.

Ivent says, “We’re NEVER going to make sequels to our games. We want to take up different challenges each time around. And getting stuck on a single series doesn’t fit into it. So… we’ll be finishing all of our ‘trilogies’ right off the bat. Like, for Strength of the Sword 3… If we want to revisit the project, we much rather do it through DLC, so that we can just build on it instead of redoing it. Why go through all the boring things again-like tutorials and stuff; when we can just give the players that liked it more of the exciting content like Bosses, Levels, Weapons and stuff.”

It is without a doubt that all the best games were derived from ideas of people knowing they can do more for gaming. We find it inspiring that two individuals were so dedicated to gaming, that they devoted five years of their life developing their own unique game.

Check out ‘Strength of the Sword’ preview below: