PS4 VS Xbox One: In-depth Comparison

Comparison of specs and other add-ons between the PS4 and Xbox One are abound after the reveal of Microsoft’s next gen console on May 21. Here is our take on it.

Although the full details have not been revealed about the PS4, we can undertake a speculative comparison with the Xbox One.

The first area of comparison that comes under discussion is the hardware. The silicon used in the two consoles is almost the same but has a few key differences. The main difference is the RAM that has been used. The PlayStation 4 uses 8GB GDDR5 RAM whereas the Xbox One uses 8GB DDR3 RAM. The PlayStation 4 scores in this aspect as the RAM used is of the same type that is used by most PC video cards. The PS4 is said to have at least 50 percent more raw graphic processing power than the Xbox One. However, treat this as a speculation as of now as no one has a hands on experience with new games on the recently revealed next gen consoles. So, we will have to wait for E3 to know for certain.

Here is a complete list of specs of both the consoles. 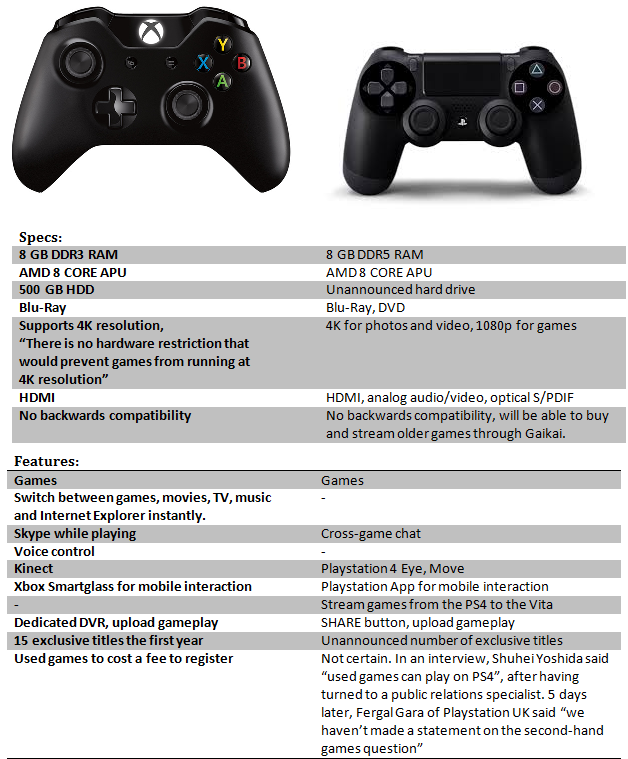 Let’s throw light on the games and exclusives that are to be released for both the consoles. Not much was said about the games in the Xbox One reveal event which focused more on the hardware aspects of the console. In contrast, the PS4 reveal event was more software centric. It goes without saying that each of the consoles’ first party games will be exclusive. Here we can take the example of new Halo, Gears of War, or Fable titles which will remain exclusive to the Xbox One whereas new Uncharted, Killzone, or Ratchet and Clank games will remain as PS4 exclusives.

Microsoft revealed that there will be at least 15 first party games for the Xbox One this year, 8 of which will be new franchises. Also it was announced that all DLC for Activision’s Call of Duty: Ghosts would debut first on the Xbox One.

Right now it’s not possible to get a clear picture of what is in store for both the consoles and what will be the difference between the two in terms of games. E3, hopefully will provide more details. 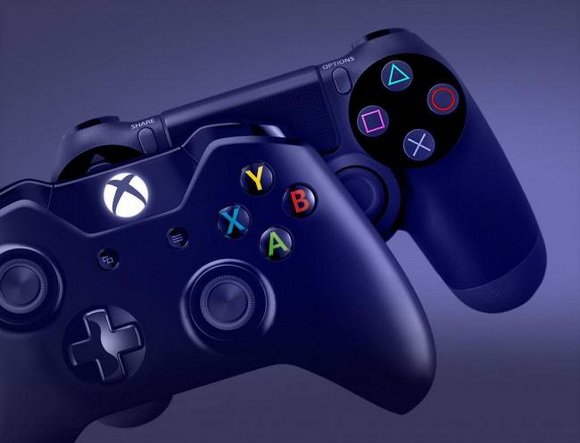 Now we come to the controllers. The controllers have not undergone much change in their fundamental design. The overall feel is the same with few differences. They are basically evolutionary descendants of previous controllers of both the platforms. A clickable touchpad on the front differentiates the Sony DualShock 4 from the DualShock 3. This added feature will facilitate the designing of games as it will provide developers with an additional option.

A ‘light bar’ is added to the body of the DualShock 4 which combines with the PS4’s Eye camera to enhance motion control functionality. The console can track where the controller is and if need be, can adjust the screen orientation with respect to the player.  The same will be accomplished by the Xbox One with the help of Kinect. Also included in the DualShock 4 is a Share button, a built-in speaker and a headphone jack.

The DualShock 4 is connected to the console via Bluetooth 2.1+EDR whereas the Xbox One uses Wi-Fi Direct. The use of Wi-Fi Direct provides 250Mbps theoretical throughput in contrast to a mere 3Mbps maximum speed that is achieved by the use of Bluetooth 2.1+EDR. The difference that this speed variation will foster remains to be seen when the consoles will be available in the market.

Sony’s Move controller and a new stereo camera will be compatible with the PS4; no plans have been announced as yet to bundle them with the system. On the other hand, the Xbox One will come bundled with a second generation Kinect. The second generation Kinect will be an upgrade from previous version as it will enhance everything from the field of view to the tracking of individuals. It will also be able to determine your current heart rate!! 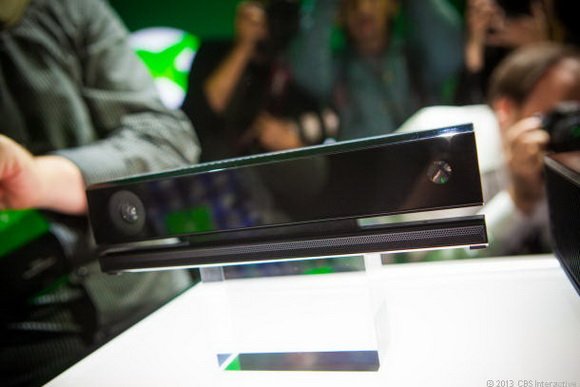 The voice control feature is the reigning feature as the entire interface can be navigated by voice commands. The Xbox One can be powered on by simply stating “Xbox on”. In addition, to log in, facial recognition is used. Sony is also not lacking in this aspect as facial recognition has also been announced for the PS4. 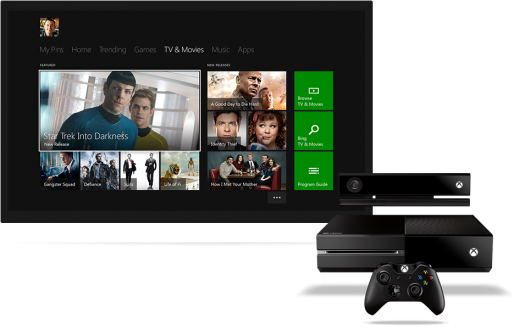 It is in this aspect that the Xbox One scores over the PS4, as per the details released till now. During the Xbox One reveal, Microsoft demonstrated how the console will integrate with the television to be more than simply a gaming console. Voice commands will enable the switch to TV shows, the web, Skype, a movie seamlessly. Multitasking will also be enabled; background applications will run even while playing games.

The Xbox One will allow you to plug your cable box into the console, in essence giving the control of Live TV to the user. Personalized channels can also be created with shows of your choice. Though concrete details have not yet been revealed, NFL will be integrated with the Xbox One. Also, most likely to make a return from the Xbox 360 are Netflix, Amazon Instant Video, and other streaming services.

Live TV integration is not on the cards for PS4. It is too early to say anything more in this regard because Sony has not released any further details.

With the addition of the Share button in the DualShock 4 controller, Sony has taken a big step in the integration of social media in its services. Facebook and live video chat will see a native integration in the PS4. Via the Share button on the controller, gamers will be able to broadcast live gameplay, take screenshots, or share videos of their latest gaming triumphs. If a player is stuck in a particularly difficult section of the game, he can seek help of other players online who can help him out by literally taking over the controls.

Also as an added feature is the ability to stream games to the PlayStation Vita via Remote Play.

The pioneer in the integration of social features, Microsoft is not to be belittled at all in this aspect. Xbox One users will be able to share the last few minutes of gameplay via Xbox Live and other social networks. The Xbox Live friends list limit has been increased from 100 to 1,000. As announced in the Xbox One site, the new achievement system, which is getting a massive overhaul,  will have “richer detail and span across your games and experiences.” Other social features in the Xbox One include built-in Skype, the ability to track Xbox Live trends, and see what your friends are playing or watching most. Smart Match and Smart Glass will be more properly integrated with the Xbox One.

Rumor has it that the Xbox One is to be priced at $499 for the base model with a subsidized rate of $299 if you sign up for Xbox Live. The pricing seems a little steep and predictably will be less than what has been rumored.

Our sources cite that PlayStation 4 is to be priced around $400 in all leading international markets.

There are many unanswered questions regarding the two consoles and their associated services. What will be the pricing structure for Xbox Live and PSN? Will Microsoft do away with the points currency system? How much will new games cost? How essential is internet connectivity?

We sincerely hope that these type of questions will be answered at E3.

Another issue that bugs both Microsoft and Sony is the problem posed by the used games market. Game publishers are crying foul over how the used games market diminishes their overall profit margin. Sony is yet to answer queries regarding the handling of this problem with the PS4. Microsoft however said in a statement, “Xbox One will support the reselling and used game market for Xbox One games. We have not announced details about exactly how it’s going to work, or how licenses are going to be exchanged.”

“What we have announced is that a used game ecosystem will be supported, so people can breathe easy. They will be able to get used games.”

The next-gen cycle is about to begin and this year’s E3 is going to be the biggest in recent history. With a host of exclusives, new IPs and various other interesting announcements on the cards by both console makers, gamers will be watching closely. It remains to be seen who’ll walk out as the initial winner and score big with its presentation during the event. The cards have been placed on the table and gamers world over are eagerly waiting to see who’ll make the first big move.