Escape Goat 2 has made its way to the PS4, thanks to developer MagicalTimeBean. PS4 owners now have a chance to play the 2D platformer where many of the basic parts of the platformer genre come together for a smooth gameplay experience. The game puts the player as a purple goat that is set to escape the Stronghold of Toragos and rescue some poor sheep souls throughout the journey.

The gameplay mechanics are smooth and it really gives the game and the player a good learning curve, especially for those that don’t have much expedience with 2D platforming games. Nothing truly original is presented in this game when it comes to what to expect from platformers, but it does not detract much from the gameplay. The purple goat has the basic controls that most players are accustomed to; double jumps, dash, and the ability to switch switches. There is a very valuable companion that is there to help the goat, a small mouse can be summoned which has the ability to crawl up walls, squeeze through tight places activate switches or even distract enemies. When new elements of the game are introduced, it’s done in a way that allows the player to learn and not worry about making huge mistakes. 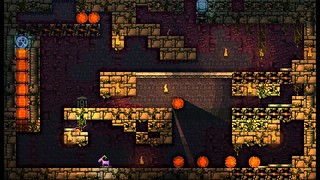 The game has a easy learning curve that makes the game more forgiving than most.

Frustration is easily experienced in this game, there are times when making a small mistake forces the player to replay a few minutes of the same puzzle again. While solving a puzzle but still not having the exact path to succeed, it can get on some players nerves as each mistake adds more and more time to the same puzzle. There aren’t many puzzles like this as many of them as not very difficult, but spending a lot of time on the same puzzle can get annoying.

Another complaint is that the game can be completed rather quickly. This game is only about two hours long and is not really that challenging. The bonus stages do add more time when it comes to the time spent on this game, but it can all be beaten in an afternoon. There isn’t much when it comes to replay value since there isn’t any additional content other than the extra levels. Some of the later stages really force the player to think, but some of the levels at the beginning don’t require must to get trough them.

Overall Escape Goat 2 is a solid game that contains easy to learn and smooth gameplay mechanics. The game is not as long as some might like, it has a low replay value and it can be frustrating at times. For hardcore puzzle gamers, Escape Goat 2 might be too easy. The flaws of the game does not make Escape Goat 2 a bad game, but they do negatively affect it a bit.

The game has a good difficulty learning curve, add the tight gameplay mechanics and this is a solid game.

Escape Goat 2 is a fun game. While it does not offer truly challenging gameplay it still provides enough content worth the price.