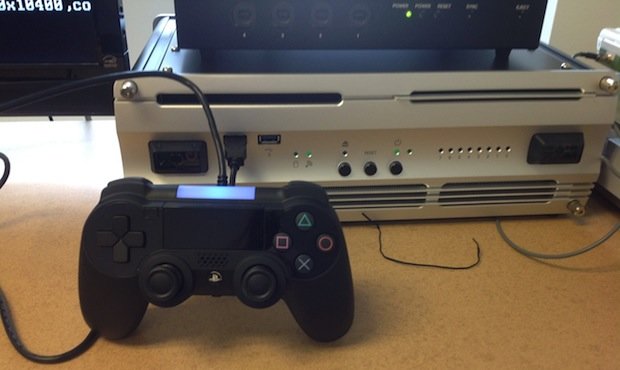 Update 2:   Another source has told IGN that the mysterious space in the middle of the controller can be pressed like a button, something Kotaku‘s source has also stated. Our separate source also indicates that the R2 and L2 buttons may actually be more in line with spring-loaded Xbox 360-like triggers and that the light atop the controller is indeed a PlayStation Move sensor.

Update: Sony has responded to the PS4 controller “can’t comment on rumors or speculation”, its typical response. We need to wait for 5 more days before we find out.

The Playstation 4 finally have an actual picture of what  its new controller looks like. The picture  spotted and come from Destructoid. but their source remaining unknown .

The controller looks  touchscreen.There’s something blue seem to be at the top. We  have no idea what that is, probably some sort of blue light. analog sticks. The Analog stick look horrible (Remember this is an early prototype, so much change may be done by now)

but we wont know until  next week at Sony major revealed  meeting See the future in New York. Hopefully this turn out to be something completely different of what Sony have for us on February the 20th.